Audit Emails are not sending/being received

Integrations can be run, data is processed, but the audit report is not received via email.

To ascertain the problem, run an integration from the scheduler tab. This will allow you to view the audit report and any errors in the right hand half of the screen.

The error can be a little difficult to understand but the key is to find the section which records the actual error message (red square), where the example below has an authentication problem. 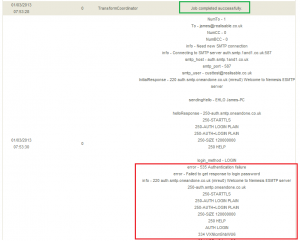 This error occurs whenever IMan cannot make a connection with the SMTP server, and may occur in the following circumstances:

This section will not discuss the step-by-step setup required for any particular email server/relay, but provide you with a list of tips and generic setup.

Some antivirus software actively blocks outgoing SMTP connections where you may receive a WSAEWOULDBLOCK error (see above).

Allow the SMTP Mail to be sent from the IMan processing engine (inetpubwwwrootIManbinIntEngine.exe).