Don’t think that all of your data is going to import every time, if you’re lucky some of it might some of the time.

When designing or writing your integration application it is essential that you expect errors and, as a result, design your program with the possibility for errors at the forefront of what you’re trying to achieve. In fact errors are probably just as critical as the data itself, if not more so.

This blog describes our best practices for designing error handling and logging within an integration.

In a previous position I had the unenviable task of having to maintain several of a colleague’s poorly written import programs. Each time I made a modification I would re-factor a certain part of the program just for my own sanity and in conjunction I maintained several integrations I’d written myself. Over time each import converged to a similar structure, all based upon the way the integration handled errors.

The resulting pattern was a 3, sometimes 4, layer structure where each layer had its own error handling responsibilities. 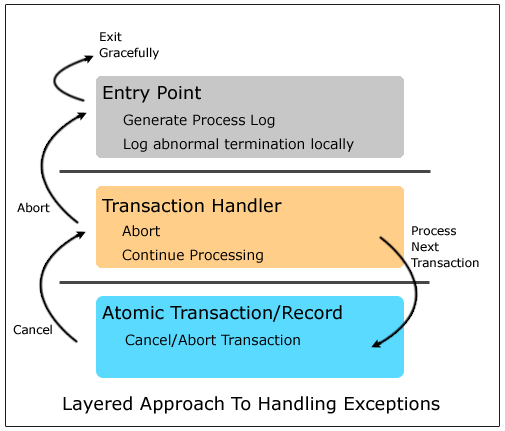 It goes without saying that whenever an error occurs in your automated integration it shouldn’t leave half written, partial transactions, database records, or files.

Sometimes however the concept of a transaction needs some thought, and requires input from business requirements, the technology of the platform and the ability to re-process data. 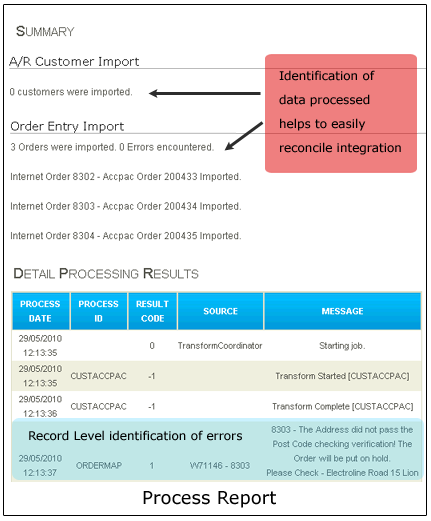 Errors, warnings & messages should be persisted as early as possible, which means writing to a database or file as and when they occur. Should a catastrophic error occur you have a process log, a trace, which would otherwise be lost if they were held in memory and persisted at the end of the process.

It is worth mentioning that there are a number of open source logging and tracing libraries available such as nlog, log4net, the .net trace libraries and Microsoft’s Enterprise framework which can provide you with a robust and feature rich way for persisting errors and warnings to a number of mediums. If you decide to use these, as opposed to rolling-your-own log scheme, the libraries can require some understanding to configure & setup and their outputs are not suited for end users.

At the conclusion of processing it is necessary to generate the process report for the end users. If you’ve followed our recommendations, this should mean re-querying the medium to which the errors were persisted during processing and re-formatting them into an easy to read format.

The best and easiest format to send the end users a process report is email for the following reasons:

Error handling and logging is a key component of any application, more so with integration! Without proper error logging and reporting, your organisation will at best spend needless time resolving and reconciling data between applications and at worst lose customers because of poor service and lost transactions.

We hope this has been of use to some of you and if you ask us nicely, we may just provide you with some samples and template code illustrating the best practices we’ve described.