All lookup configuration is comprised of two components: the initial setup within the Setup tab, and the accompanying VBScript Lookup & Data Cleanse Functions that executes the lookup.

The Lookup Function can be used in any area of IMan where VBScript is supported. 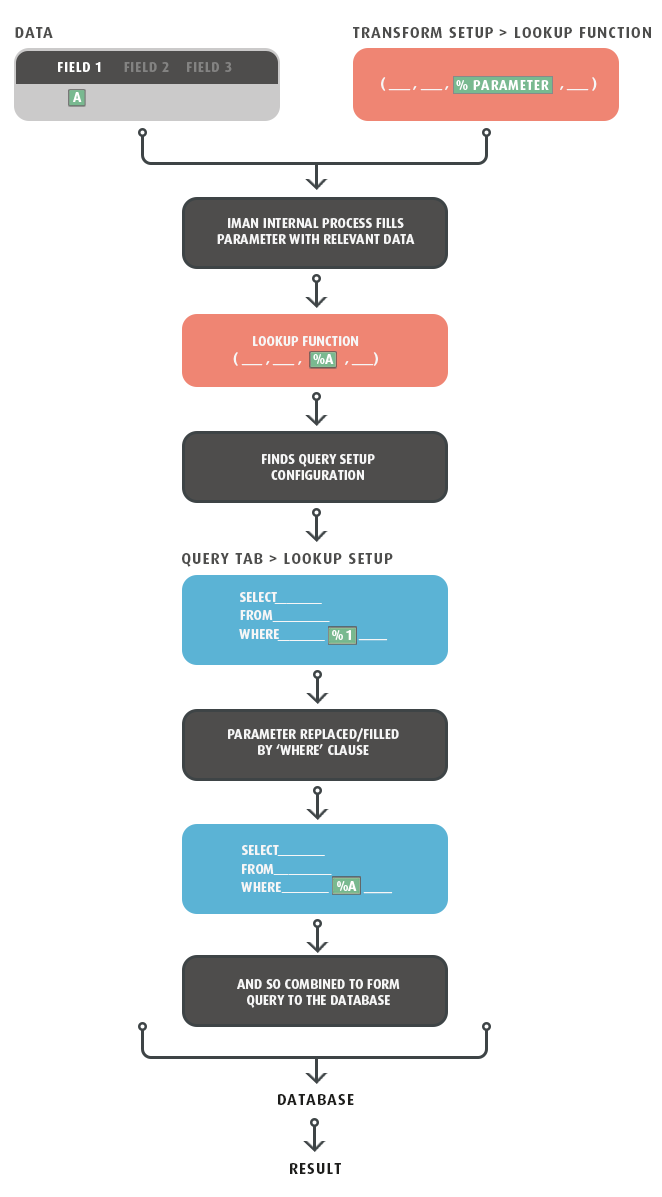 The lookup Id's are configured under Lookups in the Setup Tab.

The unique Id given to the lookup.

This Id is used to call in the Lookup function.

A useful description of the Lookup.

When selected, the lookup uses the internally maintained table as the lookup source.

When unselected, the lookup will query an external database.

When the 'Lookup from IMan DB' box is selected, the available internal lookup tables (see Lookup Tables) will appear here.

When the lookup is set to be external this field is the ‘select’ portion of the SQL query making up the lookup.

This tells the query what to retrieve, such as a Customer Id.

From Clause (External Lookup Only)

This field is the ‘from’ portion of the SQL query.

This tells the query which part of the database to search, such as the transaction type 'Orders'.

Where Clause (External Lookup Only)

For external DB lookups, this field forms the ‘where’ portion of the SQL query. The 'Where' clause tell the query what piece of data to use to find the relevant record, such as a customer's email address.

When the lookup is set to be external this field is the connection string the lookup uses to connect and authenticate to the database.

To connect to an external database a ‘connection string’ must be provided. A connection string provides the details for the lookup to find and authenticate with the database.

A good resource to construct connection strings is: http://www.connectionstrings.com/.

The database connection string can be parameterised with replacements %1, %2 and so on, for use with the Lookupdb Function and LookupWhere Function.

When checked the parameter values of the where clause will be passed as parameters. This prevents against SQL Injection attacks.

When unchecked the parameters values will be textual replacements in the where clause. This allows for complex type queries (such as IN clauses or dynamically generated where clauses) but opens the risk for SQL Injection.

We recommend enabling Safe lookups where possible especially in WebAPI scenarios of where there is a risk of IMan consuming malicious data from outside (unknown) sources.

When enabled the function saves (or caches) the result of the function so subsequent calls to the lookup are checked prior to querying the database. Caching improves performance typically on larger datasets where the lookup function is requesting the same data. On a set of requests where the deviation of the requests resembles a standard bell curve, performance is improved by 50-65%.